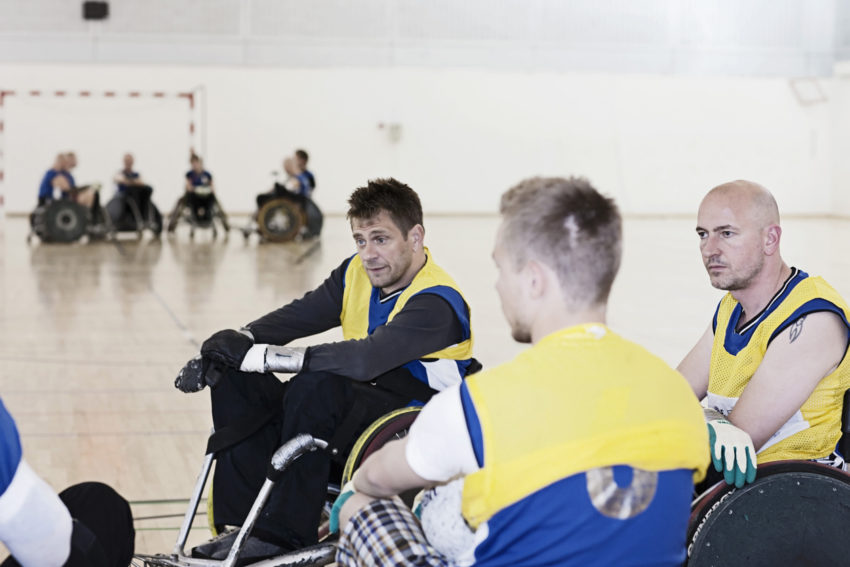 Rugby is not just the domain of non-disabled athletes. Wheelchair rugby is a popular and robust game, with clear rules, for male and female wheelchair users, many of whom have spinal cord injuries, quadriplegia or paraplegia, neurological conditions, cerebral palsy, muscular dystrophy or amputations.

Certain formats of the game require that all players are quadriplegic (where all four limbs are affected by disability or mobility impairment, while others call for impairment of at least three limbs in their players. In order to better understand this sport, let’s take a look at the rules.

Individual players of the game are assigned a classification, which reflects the degree of impairment they experience. Teams have a point limit, meaning that they have to be made up of players with a variety of classifications in order to qualify for a match.

Why is wheelchair rugby called murderball: a brief history

Wheelchair Rugby was often referred to as its original name of ‘Murderball’ when the sport was first invented. This was due to the overly aggressive nature of Wheelchair Rugby; a sport where chair contact and collisions is very much the name of the game!  Sports men and women use manual wheelchairs to get around the hardwood court, and men and women compete together on the same teams.

The aim of wheelchair rugby is for players to carry the ball across the line of their opponents, using brute force when necessary! Wheelchair rugby players also use their wheelchairs to block opposing players and prevent them from scoring, however, physical contact between players is not allowed. Anybody who has ever watched a game will find their perceptions of disabled people challenged; this is a rough and tough sport and there’s no time for playing gently!

Wheelchair rugby is now a Paralympic sport, but was first invented in Canada in 1977, as a way of getting quadriplegic athletes involved in physical activity. It spread from Canada to the US, and is now an international sport played in 26 countries.

What equipment do you need to play wheelchair rugby?

Wheelchair rugby players must play in manual wheelchairs. Many players, especially those who are more advanced in the game, choose to use specialist, lightweight sports wheelchairs that are easier to manoeuvre and much quicker. Beginners however, can initially use their regular every-day wheelchair, provided they’re well aware (and quite okay with the fact) that it could get damaged or scratched in the process. When advancing to take part in competitions, there are specific requirements that wheelchairs must meet, for reasons of fairness.

A wheelchair rugby ball is similar to a volleyball, and can be purchased specifically for the game. Cones or markers are required to mark off the goals, and a clock that offers accurate sports timings is also required.

A regulation-sized basketball court is needed to play wheelchair rugby in competitive terms, however for practice or preparation, any similar setting may be acceptable. Hardwood surfaces are preferred, with sidelines, baselines, a mid-court line, a centre circle and two goal areas clearly marked. The surface must be accessible to wheelchair users.

What types of wheelchairs are there for playing wheelchair rugby?

The offensive wheelchair is built with speed and mobility in mind – with the front bumper designed in such a way that it becomes more difficult for opposing players to hook their own chair onto the offensive player’s chair and prevent them from moving freely. Offensive chairs are usually used in wheelchair rugby by those players with slightly greater upper body movement and mobility.

The defensive wheelchair on the other hand are set up with bumpers which are specifically designed to hook onto opposing players and hold them in place so that they cannot move towards the goal line. Conversely to offensive chairs, defensive chairs are predominantly used by players who have less mobility function.

What are the rules of playing wheelchair rugby?

Wheelchair rugby teams are made up of four players on a court at any one time, although 12 players are allowed in a team overall. Teams are mixed, made up of both men and women. And wheelchair rugby matches are played in four quarters, each lasting eight minutes, with 2-5 minute breaks in between.

The winner of a wheelchair rugby match is the team that has scored the highest number of goals.

Why do players wear gloves in wheelchair rugby?

There are several reasons why a player may decide to wear gloves when participating in the sport of wheelchair rugby. One of those reasons relates entirely to comfort; however, there are a number of additional benefits including helping with:

How are goals measured in wheelchair rugby rules?

A goal is scored when an athlete has firm control of the ball and crosses the goal line of the opposing team, with two of his or her wheels.

Are there any additional rules involved with wheelchair rugby?

Contact between the wheelchairs of the players is a key part of any game of wheelchair rugby. There are certain penalties to bear in mind, however, such as the ban on hitting an opposing player’s chair behind its rear wheels to cause it to rotate, and there is also a ban on direct physical contact with an opposing player.

These moves would be considered to be fouls, and could be penalised by a one-minute penalty or even disqualification from the match.

There are limits to how long a single athlete can hold onto the ball – if a player carries the ball for more than 10 seconds without dribbling or passing it, the referee will hand possession over to the other team. Teams, once they gain possession of the ball, have 40 seconds to score a goal. Teams can also call for 30-second timeouts, while their managers can call for one-minute time outs.

If there is a tie at the end of the four periods of play, overtime is played. This lasts a further three minutes, and repeated overtime periods can be played until one team wins.