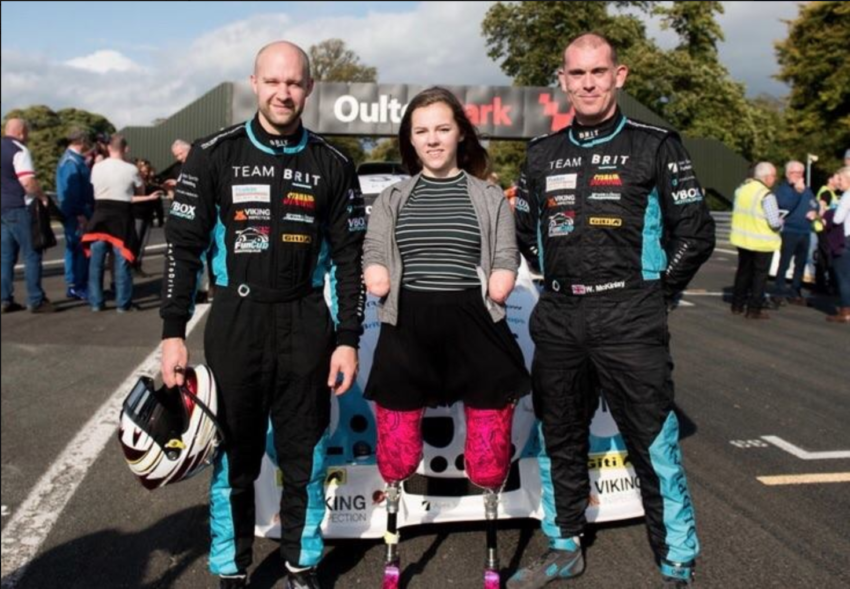 Most teenagers will have their first try behind the wheel of a car in their first driving lesson at 17 or 18. However, Izzy Weall, from Derby in the United Kingdom is working towards motor racing at Silverstone at just 14 years old with all-disabled race team Team BRIT.

However, Izzy Weall isn’t the average 14 year old girl. At 7 years old, Izzy contracted meningitis and suffered from a heart attack and multiple organ failure. As a result, Izzy had to have both her legs and arms amputated.

However, limb difference has never stood in Izzy’s way. Since her amputation, Izzy competed in a national trampolining competition, winning her Disability Category Two Novice division. In 2017, she won Young Achiever at The Mirror’s Pride of Sports Awards.

In addition to her sporting achievements, Izzy began to vlogging about her experiences as a disabled teen last year. In just six months she racked up over 8000 followers on her YouTube channel, sharing makeup tips and insights into her everyday life. It was via her YouTube channel that Izzy was scouted for Team BRIT.

The Most Inspirational Team in Motorsport

Established in 2015, Team BRIT is a motor racing team comprised entirely of disabled drivers. Originally working with injured soldiers, Team BRIT now races with drivers with a range of disabilities, including including injured ex-servicemen with combat injuries, survivors of accidents, and those with congenital defects or disabilities caused by disease.

Team BRIT have developed state-of-the-air accessible control systems, enabling their drivers to compete on equal terms with able-bodied opponents. Motor racing is one of the very few sports where this is possible. According to the team’s head coach, Team BRIT’s ambitions are about normalising disability and showing what can be achieved with a positive attitude.

After seeing her YouTube channel, Team BRIT founder Dave Player was impressed by Izzy’s determination and fearless nature. Feeling that her attitude chimed with Team BRIT’s ethos, Dave invited her to train to join the team:

“Straight away her personality just jumps out of the screen. What a fantastic, positive attitude. It is exactly the same attitude as our drivers, they have become injured, but not let their injuries govern them. She doesn’t go on about things she can’t do, she talks about the things she can do.”

At first, Izzy’s parents were feeling a little nervous about her newfound ambition to become a racing driver. Her mother, Cathy Lloyd, said she was quite relaxed about the idea until she saw Team BRIT racing at Silverstone. Cathy said, “I stood in the pit lane and I watched them driving past. I looked at her and went, ‘You’re not going to drive that fast are you?’ And she went, ‘Yeah!’ That kind of brought it home a bit. But I can’t say no to her, can I?”

Now, they’ve started a JustGiving campaign to raise the money for a driving simulator so she can train at home before taking to the track. Meanwhile, Team BRIT have created a specially moulded seat and specialised controls. In the build up to her first laps around Silverstone, Izzy is in intensive training. Izzy said, “Dave is saying it will take me about a month, so the pressure is on. Every day I will be practising.”