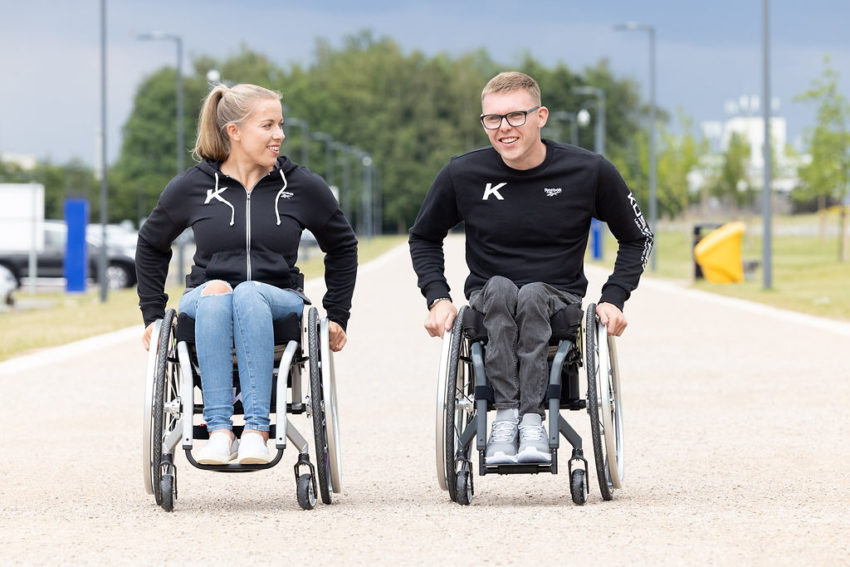 British media called her Hurricane Hannah for a reason. This summer at Tokyo Olympic Stadium Hannah Cockroft only proved that again: she claimed 2 gold medals in wheelchair sport, adding them to 5 she already won. Nathan Maguire, who is Hannah’s partner in private life, claimed his first silver.

It did not start too well. During the warm-up just before the race, it was pouring cats and dogs and the track in Tokyo was real slippery. It never happened to her before, but this time, at the Olympic Stadium, Hannah’s hand slid off the rim straight into the speeding wheel. The blood gushed out and Hannah thought, that is it for her, that is when the race was finished before she even got to the starting line. There was no time for stitches and proper care and although a doctor had a look, he could not do much. She lost her head only for that one short moment.

And then she raced.

She claimed her 7th gold medal, 11 seconds ahead of the next participant.

She says the adrenaline carried her through.

Nathan Maguire was also enjoying the wet Tokyo track with the British team. Not complaining at all! He dreamt of being on that track for 16 years and no rain was going to ruin that dream. “A little bit wet out here!,” the team was joking while warming up.

He brought home the silver medal he dreamt so long for.

When she speaks about the day she was born, she laughs now. It was not a laughing matter for anyone at the time. To put it straightforwardly: she suffered two heart attacks, her mom almost died, and her father fainted. Doctors would be the last to say she was destined for the championship. In fact, they cautiously predicted she might not make it beyond 20 years of age.

Hannah keeps recalling in her interviews how many people used to tell her what her body cannot do. What her body is disabled to do. Why she should not attend sport at school. Her family, however, treated her just like her brothers, ensuring to do physical exercises with her as much as they could.

Hence, as a child, Hannah wanted to be:

Initially, she hated the idea of using a wheelchair. But that was before she discovered the speed she could get to with a wheelchair. The freedom that came along. 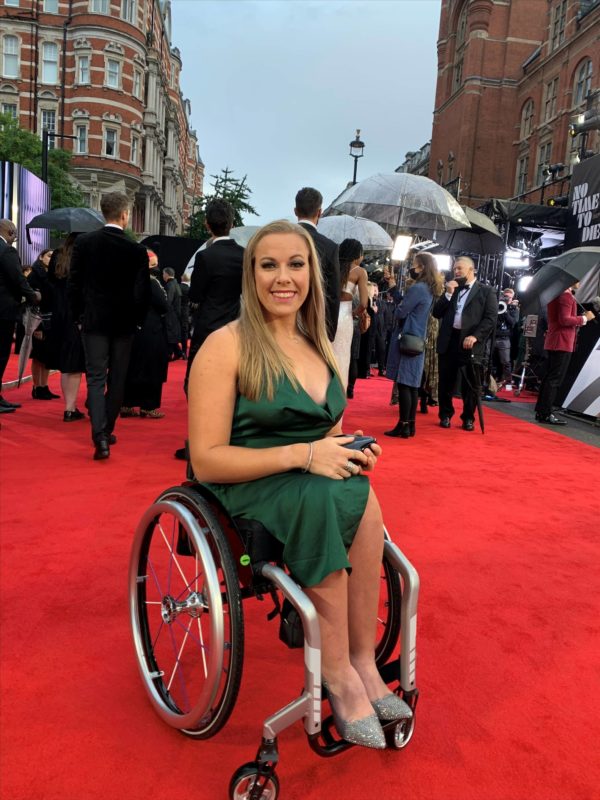 Nathan on the other hand, who was suddenly paralysed at the age of 8, was pushed by his father to try all kinds of sports. And he gladly did, coming to the conclusion that be it not for his disability, he would never meet so many amazing people around the world while competing.

Hannah’s wheelchair racing career kicked off in 2011 when she flew to New Zealand and picked up a gold medal in the 100m T34 event at the World Championships.

Nathan started competing at junior level competitions first, before going on to secure a gold medal in the Berlin T54 Relay event in 2018.

From wheelchair sport to relationship

It was just after London 2012 Olympics when Hannah had won 2 gold medals that Hannah and Nathan met for the first time. Hannah was an inspirational speaker at a Youth Sport Trust talent development day and Nathan was there as a young talent. “Nathan has a photograph of himself getting an autograph off me, but I can’t remember that!” Hannah told us.

The pair met again “properly” in the lead up to the 2016 Games in Rio. Nathan was on the relay team with Hannah’s training partner Richard Chiassaro.

And then, there were the same competitions, same training camps, same after training meetings and somehow, they just grew close. 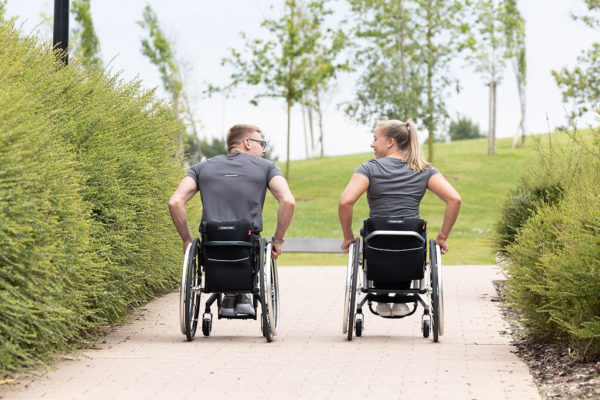 What does it take to win

There were ups and downs to get there and COVID-19 years were probably the toughest of all.

Look, both were training hard for European- and world-level competitions which were all delayed. Gyms, tracks, training – everything was shut down under COVID-19 lockdown. We all went through this dreaded time of imposed isolation.

They were asking themselves, all that training, watching their diet, maintaining healthy sleeping habits, more training, cutting on partying, training – why were they doing it? Was this wheelchair sport worth it at all?

They started adapting. Gyms closed? Tracks unavailable? No heat chamber? No problem. “We’ve built a gym in our garage, found new road loops to train on close to home and most recently we have used a pop-up greenhouse as an improvised heat chamber”, Nathan shared on his Instagram along with a picture of a plastic greenhouse just next to a shed and perfectly cut lawn.

When things go south for one

Imagine this: Hannah is smashing a gold medal and meanwhile, at the same international event, Nathan crosses the line as the 6th. Any hard feelings? “No, not really,” Hannah told us. “I think we’re both just super proud of what the other manages to achieve. We are in completely different races and classes, so it’s unfair to try and compare my medals to his, or vice versa. We just enjoy each other’s successes.”

Hannah is class T34 and Nathan is class T54. In simple terms, not only takes he part in relay races but also in faster ones.

There’s been “lots of times” where one half of this dynamic duo hasn’t performed in a competition quite like they’d hoped or expected to, when the other half has smashed it beyond all expectations.

“Our pride for the other person just outshone our disappointment in ourselves in the situation,” Hannah told us. They were both able to separate their own feelings about their own performance to celebrate the other. As Hannah put it: “It adds a positivity to the day if you’re having a bad one to see someone you love doing well!”

“Who pushes who more?” we asked. “I think we both push each other equally,” Hannah replied. With Nathan being an early bird, he is better at getting both of them out of bed and getting to training on time. Come the afternoons, it’s Hannah’s time to shine and she’s right there with all the prompts and encouragement they need to ensure they both stick to their training schedules.

For Hannah, there is an acute sense of awareness that Nathan will always be faster than she is and that he operates amongst a completely different field of athletes.

“In training, Nathan is definitely faster,” she confirmed, “so he’s been great for me to work on my 800 m as he can easily push at my pace. I am no competition or help for him on the track, but I can push him more in the gym when we are lifting weights!”

Both appreciate having close someone who understands why you do what you do and who has the same dreams and goals. 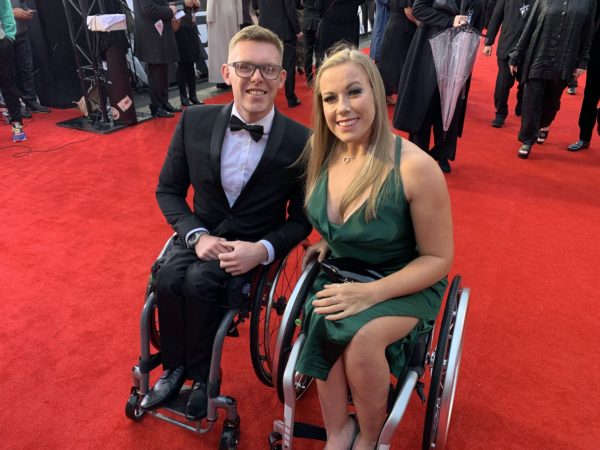 Outside of wheelchair sports and wheelchair racing the couple shares a passion for everyday run-of-the-mill things, such as: hitting the shops for a little retail therapy, enjoying delicious food, and engrossing themselves in a great movie.

They don’t just have a hunger for success on the track, they have that same hunger for life. Both both show up at public events with Hannah being honoured with MBE (Member of the Order of the British Empire), appearing in commercials and as a popular public speaker, both are Küschall ambassadors.

Besides being serious about preparing for 2022 competitions and focusing most of their attention there, the couple wants also to pursue their down-to-earth dreams. “We’d love to own more properties and do them up one day once we have finished our own house”, Hannah says. “Otherwise, we just want to be happy and comfortable and make the most of any opportunities that come our way!”

And they will still plan to use their self-made gym in their garage at least 2-3 times a week.