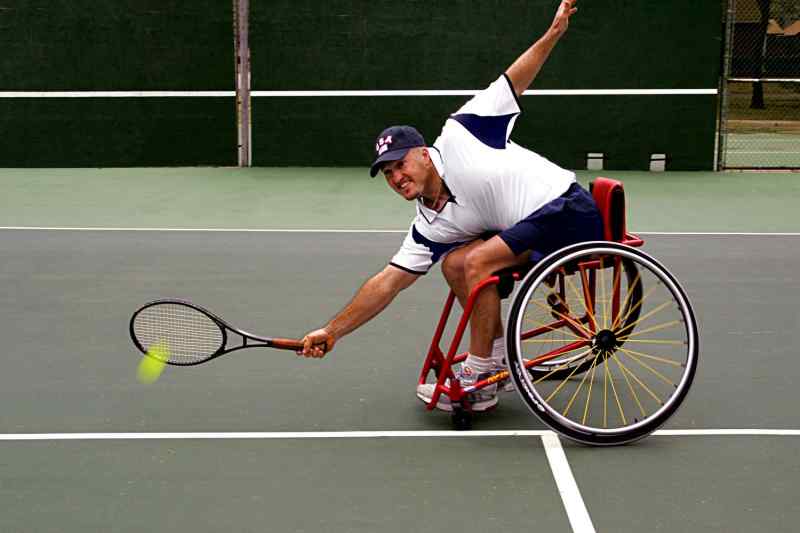 What do you know about wheelchair tennis? You’ve undoubtedly heard of Wimbledon with its infamous strawberries and cream and celebrity spectator crowd, but one of the most popular adaptive sports out there, the thrill of being outdoors whilst keeping fit and active, and having the opportunity to even play doubles with a partner is often what appeals to many disabled people when it comes to wheelchair tennis.  Many people take it up as their first disability-specific sport, in fact – thanks Wimbledon!

But, how is it played? Well, first things first, when considering the rules of the game, they are almost (but not quite!) identical to the running game. The one major difference to the standard ITF rules of tennis is that player is allowed two bounces of the ball before returning it, instead of only one bounce.  However, it is only the first bounce that is required to be in the court of play.

Ready to get going? You may have a lot of questions before starting to play it, but here are five of the most important considerations:

So, where did it all begin?

Twelve years later, in 1988, the Paralympic Games were held in Seoul and wheelchair tennis was given a shot as a demonstration sport, moving onto full medal status in 1992 in Barcelona. Quad singles and doubles events took a little longer to make their debut, and shone brightly at the Athens 2004 Paralympics.

And, believe us, it’s fun to watch!

The movement and positioning skills of the wheelchair using players is really something to see.  Pair that with some amazing rallies and serious racket skills, and you have yourself an incredibly exciting sport! You might even know some famous names in the

wheelchair tennis circuit: Scotland’s Gordon Reid won a gold medal in the Rio 2016 Paralympic Games, and is currently 7th in the world, with Argentinian Gustavo Fernandez currently enjoying a taste of the number 1 world ranking spot.

So, you want to play?

Time to swot up on the scoring of tennis (remember the difference between your ‘love’ and ‘advantage’!) and get used to a tennis wheelchair.  There’s some great skills that can be learned here, including how to pick up tennis balls and keep some spare ones for after a dodgy serve – all in your wheelchair wheels!

If you are ready to get serving and rallying, and are interested in learning more about what wheelchairs may be best to use for enjoying this sport, check out the Invacare Top End Pro Tennis Wheelchair online. You can see what type of features and adjustability are available to help you play your best game.

Parts of this post are based on information found in the article, Wheelchair Tennis-Top 5 Questions, by Roll Rev.

Author: Annie Beth Donahue is a professional writer with a health and disability focus.