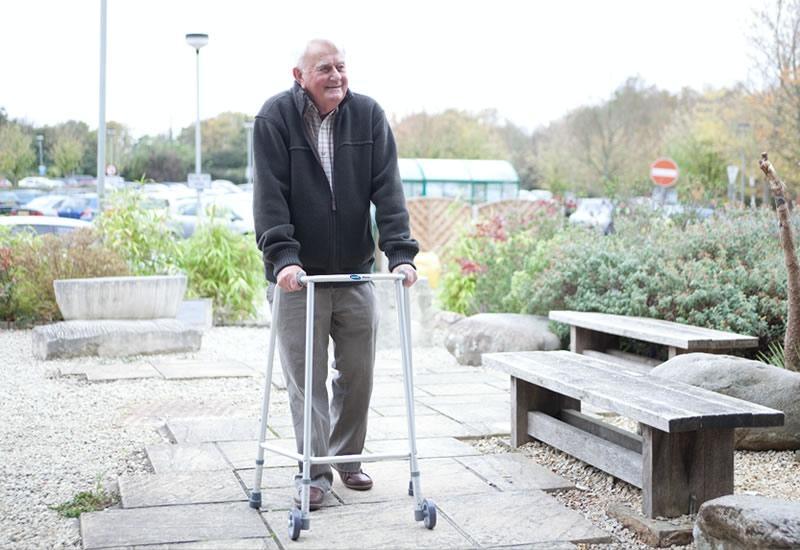 A walking frame is a device used by those who have difficulty walking, to help improve stability, safety, and maneuverability.

Do you or somebody you know have mobility concerns but are also ambulantry? Perhaps it’s a struggle getting around on foot? Maybe it has been recommended to use a walking frame (or a zimmer frame) and you don’t know much about them? Well worry no more, as this article will give you the full rundown on everything from what a walking frame is, to what types there are, and how you might choose the best one for you to use.

Why might a person need to use a walking frame (zimmer frame)?

If a person is unsteady on their feet and are at risk of falling, then they may need to use a walking frame to aid with stability and safety. A walking frame may also be necessary if the user has limited lower body strength. The walking frame can act as a prop when walking, lessening the burden on lower limbs and hips.

When not using a walking frame, those who are unsteady on their feet will be at greater risk of falling. This is particularly true if the individual is unable to lift their feet very far off the ground – leading to the potential for trip hazards, not only when ‘out and about’, but also within their own homes. For elderly patients especially, any trips or falls can ultimately be life threatening. Broken bones often take longer to heal in older patients, which can also result in lengthy hospital stays and in rehabilitation clinics.

Who recommends a walking frame to a person?

In usual circumstances, a walking frame would be recommended to a patient by either a doctor, nurse, or other health professional (i.e. an occupational therapist). They would highlight the needs of the patient and suggest that a walking frame may be the best course of action moving forward, in order to maintain the safety of the patient when he/her is mobilising independently.

When was the first walking frame invented?

In terms of the walking frame that most people are familiar with today, it was invented in the late 1940’s by a British man named William Cribbes Robb. At a later date, the walking frame was taken by an American company called Zimmer Holdings, where it was ‘perfected’ and improved on, leading to the creation of the Zimmer Frame.

Despite the fact that walking frames (as we know them today) are relatively modern looking in design, there is, in fact, evidence to suggest that the walking frame has been around for a lot longer in society.

Walking frames can be dated as far back as the first century, where illustrations on an Egyptian terracotta pot depict a scene involving an individual walking with a walking frame. This terracotta pot can now be viewed at the British Museum in London.

Similarly, at the turn of the 16th century, Hieronymus Bosch painted a picture which included a man standing with what looked like a walking frame encased around him. The walking frame appears to have four small wheels attached to the bottom, suggesting that it was designed to move with the individual as they were walking.

These are just two examples of walking frames being used throughout history. Therefore, despite walking frames being improved on in the 20th century – perhaps it is too hasty to suggest that they were invented as recently as this. The evidence at hand suggests that walking frames have existed in one form or another for hundreds (if not thousands) of years.

What are the types of walking frames?

One such type of walking frame which can be found on the Invacare website, is the Rollator. The Rollator is a slightly bulky piece of kit, with sturdy, durable wheels, that are great for all manner of environments. These Rollators also come equipped with brakes, and a basket for storing items such as groceries.

How do I choose a walking frame?

When it comes to choosing a walking frame, your health professional or Occupational Therapist will likely assist you when deciding on which walking frame is appropriate for your needs. Once an array of walking frames that suit your individual needs has been identified, it’s then just a case of deciding which design catches your eye the most and appeals to your own personal style. It’s a subjective choice, after all.

Does my walking frame need wheels?

A walking frame does not necessarily need to have wheels. Some forms of walking frame have no wheels at all. Generally speaking, walking frames with wheels are better suited to individuals who tend to tire easily. The wheels allow for smooth pushing of the walking frame and it therefore requires minimal effort from the user. A walking frame without wheels, however, needs to be lifted off the ground and placed a step or two in front of the user, by the user, as they maneuver.

What is the best walking frame for elderly people?

The type of walking frame which would be best suited for an elderly user, depends almost entirely on that individual’s own personal needs and medical history. For example, all walking frames tend to have either three or four legs, but some have four wheels at the bottom of the legs, some have two wheels, and some have no wheels at all. The walking frame needed by a user, will therefore depend on the level of strength and ability of that said user. More information on the differences in walking frames can be found below.

Are there any differences between zimmer frames and walking frames?

Some depictions of a zimmer frame suggest that they tend not to have wheels. Alternatively, they may only have two wheels, at the front, and the other two legs of the frame have none. Walking frames on the other hand, often tend to have wheels at the bottom of the frame, to assist the user with mobility.

Generally speaking though, there isn’t actually a difference between a walking frame and a zimmer frame – despite the common notion that zimmer frames don’t have wheels. Essentially, a zimmer frame is just a brand of walking frame. Sometimes, a type of brand can become the universally recognised alternative name for the product itself. Another example of this can be seen with the ‘Hoover’ in Britain, being the common name for a vacuum cleaner, despite the Hoover being a brand of vacuum cleaner.

What benefits do walking frames bring?

There are many great benefits to be had from using a walking frame. These benefits include:

There are some additional benefits, such as the ability to take longer walks, and the use of walking frames when recovering from surgery. All in all, there are several key improvements that can be garnered by an individual who opts to give a walking frame a try.

For further reading on subjects such as this, or to find out ‘what is the right walking aid for you’, then why not check out more articles here on the Passionate People blog?