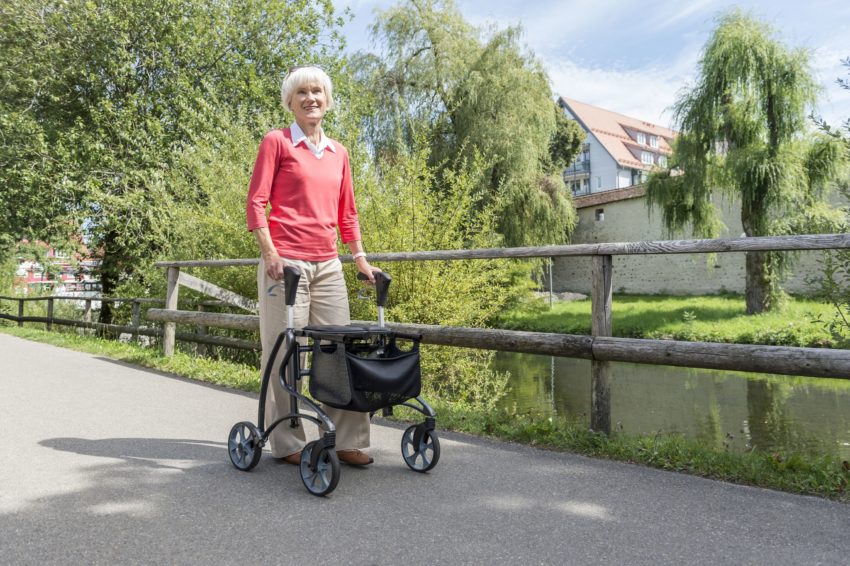 If aids were some sort of inanimate influencers, wheelchairs would surely be the top influencing dog. Not far behind in this popularity pageant are scooters, beds and lifters. However, there is one unsung hero of this aid world. Forever humble, yet unparalleled in its simplicity and versatility – meet the rollator.

Let’s get one dilemma out of our way, first. What’s the difference between a rollator and a walker? The answer seems almost obvious, but let’s make sure we’re all on the same page here.

A walker or walking frame is an aid or a tool for people who need additional support to maintain balance or stability while walking, most commonly due to age-related mobility issues or disability. A rollator is a type of walker – also called a wheeled walker – and it consists of a frame with three or four large wheels, handlebars, and it sometimes has a built-in seat.

How it all started

By differentiating rollators from walkers, we unintentionally scratched the surface of their almost unified origin story. Let’s explore it in more detail, but briefly.

Walkers started appearing in the early 1950s. The first US patent was awarded in 1953 to William Cribbes Robb, for a device called “walking aid”, which had been filed with the British patent office in August 1949. Two variants with wheels were both awarded US patents in May 1957, and the first non-wheeled design that was called a “walker” was patented in 1965 by Elmer F. Ries. The first walker to resemble modern walkers was patented in 1970 by Alfred A. Smith.

Although first walkers with wheels became a thing in 1957, rollator wasn’t invented until 1978, when Aina Wifalk, a polio sufferer from Sweden, came up with the idea for a wheeled walker and called it a rollator. Although originally a brand name, “rollator” has become a genericized trademark for wheeled walkers in many countries and is now also the most common type of walker in several European countries.

It’s more than meets the eye

It truly is. A metal walking frame with wheels, brakes, bags or baskets, foldable seats and trays is not just a walking frame anymore. It’s a tireless support for a lifestyle you want to have.

From daily housekeeping chores and personal routines to shopping missions made easy, from lakeside walks with a loved one to casual chats with a neighbour, from an impromptu seating option to an injury-avoiding brake squeeze – rollator is unique in its versatility. And if it can help you, it doesn’t matter if you’re young and have a disability or if you’re having age-related mobility issues. Or anything in between. To prove this point, a study in the 2000s found an increase in the use of rollators by young people “usually in their thirties who are setting a new standard for walking among young people”.

And yet, it’s just a metal walking frame with wheels.

Although walkers come in many shapes and sizes – there’s also a walker-cane hybrid designed to bridge the gap between an assistive cane and a walker – it’s not easy to choose a bad rollator. There are a number of options and features to choose from, but there’s only one guideline you need to follow – lifestyle you want to have.