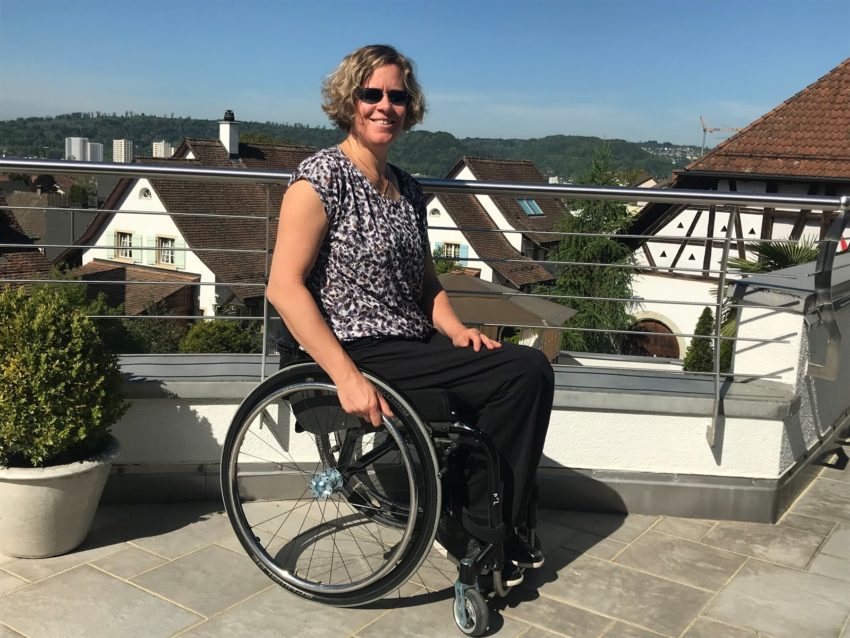 Karin Suter-Erath is one of the most decorated para-sportswomen in Europe.

Playing not one but two para-sports to an international level, Karin is an inspiration to athletes everywhere.

After winning a bronze medal for doubles tennis in the 2004 summer Paralympics, Karin now had her sights set on medals for badminton in the Tokyo 2020 games. Here, read more about Karin’s incredible achievements and her sporting story.

Karin was playing sport to a high level throughout her childhood. During school, she spent all of her free time on the sportsfield, until at the age of 13 she began playing handball. From the age of 17 to 27, Karin played handball at the highest level, travelling from her hometown of Basel, Switzerland, to tournaments all over Europe.

Whilst competing as a professional handball player, Karin studied physical education at university and taught sports at her secondary school in Basel. Until this day, Karin is a dedicated sports teacher, helping to train people in a rehabilitation clinic in Switzerland.

In 1997, Karin’s professional handball career was cut short by an accident that left her paralysed from the waist down. However, this was not the end of Karin’s sporting career; quite the contrary. Whilst she was in rehab, Karin discovered wheelchair sports, first trying her hand at para-tennis.

Karin quickly discovered she had amazing talent for wheelchair tennis. Once her rehab was completed, Karin shot to the top of her game. From 2005 to 2007, Karin climbed up the world rankings in wheelchair tennis, reaching the peak of her success ranked at number 6. In the 2004 Athens Paralympics, Karin competed with fellow Paralympian Sandra Kalt to take bronze for Switzerland in the women’s doubles. In 2008, she was voted Basel’s athlete of the year alongside men’s tennis legend Roger Federer.

However, tennis is only one of the para-sports in which Karin has made a major impression. In between her achievements on the tennis court, Karin had also been playing wheelchair badminton. In 2010, she competed in the para-badminton European Championships, winning silver in women’s doubles. Since, she has become triple European Champion, double World Champion and is ranked the best in her class. In 2015, she was presented with BEC Para-Badminton Player of the Year Award – the first time a player in a wheelchair has received the accolade.

Now, Karin has her sights set on the Paralympics once more – for the first time, the Summer Paralympics Tokyo 2020 will include badminton. Despite being one of the older players in the sport at age 47, Karin is determined to compete. Now, Karin is training hard to retain her top rank in her category and go for gold at in Tokyo.

It’s an incredible achievement to play to a world-class level in one sport, never mind three. Dynamic and determined, Karin Suter-Erath is one of the most inspirational players in para-sports. As a Kuschall ambassador, Karin is supported by the best possible para-sports equipment – and we’ll certainly be rooting for her on the badminton court when the 2020 games arrive.